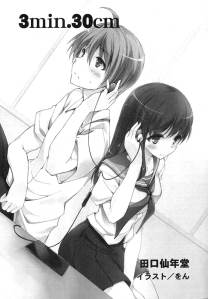 During my lunch break, I was chatting with my friends as I ate. It was my daily habit to listen to music and chill out before class started.

Or rather, it was a daily ritual for me before afternoon classes.

But this ritual was ruined by that person.

What was that “Is that Winter Frappé’s new song?” about?

And what would that person do if I answered no?

She even asked me afterwards, “May I listen to it?”

I was an idiot for agreeing to it.

The greatest mistake I made was to hand over my earphones.

At that time, I should have just handed over my portable player over to her as well. She would have sat down at her seat in that case, and I could have taken a nice nap quietly.

I did not understand her very well.

We were in the same class, but we hardly talked to each other. All I knew was her name and her club activity. Coincidentally, she was in the same club as me, so we would often meet at the bicycle park after school.

The only activity in our club was to say farewell before we returned home, and we might just meet each other once every month—anyway, that was the kind of relationship we had.
We hardly had any interaction.

I never heard any good rumors, nor did I hear any bad rumors about her.

However, I guess she was a kind person.

That was because when she first talked to me, she would show a slightly troubled expression.
She would also refuse politely when I handed my earphones to her. She was aware that she was doing something inconsiderate as I was listening to a song.

Even so, she could not help but ask me “Please just give me one.”

She sat down on the chair beside me, took the earphone I handed over and stuffed it in her right ear.

Her arm that was poking out from her summer uniform touched my elbow. The fresh and soft feeling caused my eyes to be instinctively attracted to her arm.

—Why did I not reject her?

At this point, I could not say no. I continued to keep one earphone in my ear as I pressed the replay button.

It was a short song that started with the vocalist singing a cappella in a low voice.

I looked at the information of the track. Its duration was exactly three minutes.

She was looking forward to this new song from Winter Frappé .

I thought this was a mini-band. My friends knew the name of this band, and they often appear on music magazines. However, I was the only one who could be considered a fan of their works.

I looked at her as she sat beside me.

She glanced aside, with her hair giving off a light fragrance.

—Is she one of their fans too?

If not, why would she react to a weak sound leaked out from the earphone of a male classmate she normally does not talk to?

However, I would not talk to anyone if it were me.

If I hear someone play a similar song in the earphones, I would hurriedly leave and head home to check.

She however did not do so as she immediately went for my earphones, so I suppose she is rather passionate.

I could not help but feel happy about it.

To be honest, there were quite a few bands that were better than Winter Frappé . Their lyrics were somewhat immature, and their tunes felt stiff at times.

However, I liked this kind of immaturity.

To put it in a way, they were a band that would exemplify the word ‘youth’ when they get on stage. The manga-like refreshing feeling however felt very delightful.

It felt like the members of the Winter Frappé were still in a fictional school, studying, even though they became adults.

See? The lyrics that were full of youthful melodies symbolized the band.

—Damn it, she is laughing in the same way too!

It seemed that my thoughts were seen through, and I cannot help but lower my head.

It had been 30 seconds since I looked at the player.

Wait, hold on. Do I have to hold on in this position for another 2 minutes and 30 seconds?

I lifted my head and looked around the classroom.

Nobody was looking at us. Everyone was seated at their own places. Some were playing
Monopoly cards, some were surfing the net on the phone, four people were playing games, and some were biting on snacks and laughing about.

I hoped to be a laughing stock though.

If that would happen, I could be able to hide my own embarrassment and get away from her.

I did not hate her.

And I did not hate the fact I had to let her hear.

Ah, never mind. How shall I express my feelings now?

Speaking of which, does she not hate listening to this song with someone like me…?

She closed her eyes.

She swayed her body together with the rhythm.

I could tell from her expression.

She really liked this band.

At this point, I did not listen to many songs. However, I had been replaying the same song over and over again ever since it was sold two days ago.

Speaking of which, she knew the song I am playing in my earphones, yet she did not check the sales date?

She should be able to find out if she went to the internet to search. The Winter Frappé ’s official blog updates every week, right?

Maybe she could not access the website…no, that was impossible. She was still playing around with her phone.

However, it has been two years since they last released a new song, so it was reasonable for her to forget. During that time, they had only one band. Even when they appeared on television, they were just part of a recommendation from a local rock band.

Did she go to their live-concert?

On a side note, I never went for that concert. But there is a live-concert that will be organized in a very large hall, tickets will soon be on sale. I am wondering what to do.

If I ask about the concert, she will probably tell me many things related to it.

But if we go together…

Wait, what am I thinking!?

I do not plan on going on a date! I just want to go to a concert!

However, if she is going to be beside me—I will probably enjoy myself.

Once the refrain ended, there was a short guitar riff.

1 minute and 30 seconds. We were midway through the song.

Speaking of which, it is really hot today…even though we just entered the month of June.

—It’s because she is beside me.

I understood very well that my body temperature was rising.

I would often smell the shampooed hair of those long-haired guys if it is just the smell of the
shampoo used. However, the kind of smell the girls have is different.

It felt a little dizzy…but it could really calm my heart down.

I did not know whether it was because of this smell or something else, but my heart would beat wildly for a while, and then steady itself later.

She was not a beauty, and neither was she ugly.

However, her expression as she was listening to this song was really—

AHHH, STOP THERE, ME!

I shook off the random thoughts and focused my attention on the music.

Soon, it would be the refrain again.

I touched my heart slightly to calm myself down. It was still beating loudly.

Currently, my heart was beating like a drum being hit.

I looked away i order to avoid concerning myself with this.

As I looked on the table—I suddenly saw her fingers.

The fingers that were tapping to the rhythm were long and pretty.

Did she study some kind of musical instrument?

My stare went from her fingers to her white skin. Afterwards, I looked at her petite shoulders—

And finally, our eyes met.

I was overly shocked, and could not help but look away.

Speaking of which, why was she looking my way, too!?

I am really sorry for acting so suspiciously! But was it not a crime to look at me with such an innocent expression!?

In that case, it was my fault for glancing at her with indecent eyes now, huh?

Ahh, I messed up the rhythm of her fingers. I am really sorry.

I turned my head in the opposite direction, but I could see her profile on the corridor’s windows.

The windows reflected the image of her using both of her hands to cover her face.

…What is with that kind of reaction?

Damn it, why can’t it end sooner?

I did not have any negative feelings about having to replay the music.

I just wanted to be freed as soon as possible.

My daily life was already messed up. It will definitely affect the afternoon lessons.

But this little episode will soon end.

There was a long interlude after the refrain. Ah, the keyboardist is really brilliant. The skills he had could not possibly be human.

I cautiously looked aside to avoid meeting her in the eyes again, and saw her smiling.

She was definitely thinking that this keyboardist was really amazing.

After this, the refrain will be sung again, and the entire song will be over.

The strange three minutes will end.

In that case, she will be heading back to her seat, and I will be able to prepare for the next class.

Was this not good?

What shall I say when it is over?

Maybe I should talk about this band after all.

Other than me, no one else was a fan of Winter Frappé . Then was she not a precious comrade-in-arm? Maybe if I continue to talk, we might be able to find something new to talk about.

Ah, this is now the final refrain.

Just give me a little time.

I still want to say something.

Is this fine? Is it really fine to end without saying anything?

Is there not something to talk about? Like what we feel about this song?

However, I really could not think of anything. I am an idiot.

At first, I thought that three minutes was too long. But right now, I found that too short.

Can I reverse time now? Damn it.

I felt that I should say something, and thus, I opened my mouth.

But before I could speak, she lowered her head first and said to me.

“Thank you for letting me hear this song.”

Of course. Expressing one’s gratitude first was crucial during conversations.

Then, what shall I reply?

Gosh, pull yourself together, me!

There should be things to talk about, like ‘this song is good’, or ‘you really like this band’.

The three minutes of thinking time has ended!

I encouraged myself in my heart.

And then, she took the initiative again.

“Can you please let me hear it again?”

—Looks like I still have some time to think again.