Once they got home, Mahiru changed into plain clothes, puffing her chest under her one-piece skirt. She was not being proud of it, but maintaining balance for the thing to be placed on it.

There were significant lumps on her chest, and balanced upon it was the bubble tea cup she bought before they returned home. She had finished the bubble tea, and it contained water and some ice.

Amane saw her balance the cup, and his eyes just wavered.

He was the one who suggested this, but once he saw her actually do it, he found the destructiveness to be way beyond his imagination. She really could do it, so he thought, and there was an unspeakable sense of shame rising in him.

Mahiru was confident in her own body. One might say she had always focused on maintaining a fine figure. She never thought she would fail at this challenge.

“…Is there anything particularly attractive about this to males?”

“Huh…is that so? Speaking of which, Amane-kun. Do you prefer them big or small?”

Amane did think that Mahiru might one day raise this question, but since she asked so boldly, he was left conflicted as to how he should answer.

It was not a matter of size. Amane felt that he would not mind the size as long as it was Mahiru. The more important aspect was the touch. He had no strong bias to size, but after all, men would long for such a fluffy feeling.

But if he told her honestly, “You are a boy after all, Amane-kun.” she might reply reluctantly.

“…I think size isn’t a problem as long as it’s you, Mahiru.”

“You are avoiding the question.”

He was trying to give his view as a boyfriend, but Mahiru thought he was avoiding the question, staring at him with a displeased look.

“I will not be angry. Please state your honest opinion.”

“Ah, erm…I like them at your size. Like this, just big enough to fit a hand…a-and, besides size, there’s also softness. I think you’re good like this…that’s all.”

Faced with a reproaching stare, Amane could only blurt out his honest thoughts, and pursed his lips together.

It seemed Mahiru was embarrassed about the softness, for she quivered slightly, her face blushing.

Amane did not know how to comfort her, and for the time being, he felt he should reach his hand out and pat her head to calm her down. However, she shivered greatly, and took a step back.

Splash, it sounded like water had landed from above.

Mahiru looked down at her chest, exclaiming in surprise.

As expected, the massive movement caused the cup to topple, and the liquid in the cup drenched her chest.

Luckily, it contained water, and at most, it would cause the one-piece dress to stick upon her skin.

However, Amane was struck with a massive visual shock.

Mahiru was wearing a white dress, and as she was soaked, the skin sticking to her clothes was visible. The skin, and the bra she was wearing were vaguely showing before him.

Light green today, once he knew of this information he should not have known, Amane had the urge to slam his head onto the wall.

“No I shouldn’t have touched you.”

This would not have happened if Amane had not reached out to her.

“Anyway, I’ll lend you my clothes. Go change into it and dry your clothes, or else you’ll catch a cold.”

He could not let Mahiru remain drenched, so he hurried into his room, got a large T-shirt, and handed it to her. She stared intently at this shirt.

“No-not that…I shall get changed then.”

Mahiru averted her eyes, and hurried into the washroom. Amane watched her back, and knelt down.

Even though Mahiru would have understood to some extent, she probably did not want Amane looking at her with such lecherous eyes. Even she would feel embarrassed and uncomfortable about him commenting on the feeling.

Mahiru wanted Amane to state his true thoughts, but he was too honest about it, and it would have repulsed her.

(…Her impression of me’s ruined now.)

He should not have been honest to such extents, and reproached himself in regret, his forehead knocking into the table next to him. Then, he heard the clear sounds of the slippers on the floor, approaching him.

It appeared Mahiru was done changing. Amane turned towards her with his head hung low, and saw her glossy white legs.

He looked up unnervingly, and saw her in the T-shirt covering till half her thighs——he then stopped lifting his head, and averted his eyes.

“Erm, why are you wearing only a T-shirt?”

“This is what you gave…Amane-kun, your forehead’s really red. Did you hit something?”

Mahiru was wearing a one-piece dress before this. Having recalled that, Amane cursed his folly, and Mahiru knelt next to him, patting his forehead.

She continued her gesture, and Amane could not bring himself to look aside. He turned towards Mahiru, and found her wearing the no.1 clothing a male would want his girlfriend to wear (according to Amane’s findings)——the boyfriend’s shirt.

Luckily, Amane was bigger, and his T-shirt was relatively larger. He chose a larger shirt for the petite Mahiru, and it was large enough cover her thighs.

However, it was abnormally big on the slender Mahiru. The collar was just large enough on Amane, overly large on Mahiru, and the T-shirt was on the verge of falling from her shoulders.

The massive collar was showing her undergarments. His eyes spotted that faint green, and he experienced the so-called male instincts.

“…It is red and swelling. What did you just…”

His frustration was relieved, but with Mahiru leaning towards him, a bigger frustration loomed. She was leaning forward, and the parts large enough to balance a bubble tea cup were partially exposed.

Amane did not explain in detail, instead merely hinting. Mahiru widened her eyes once she heard that, and smiled, looking a little perturbed.

“…You are mistaken, Amane-kun. I do not dislike that. I am just a little bashful…I am glad that you like it, A-Amane-kun.”

She lowered her long eyebrows, putting her hands upon the lumps. She looked adorable, and he had the urge to embrace her. However, her attire was a little worrisome, so he resisted the urge.

She spread her arms wide, welcoming him. He stared at her, the scales of balance in his heart greatly shaken, and when she suddenly looked a little disappointed, he hastily embraced her.

The cloth between them was a little thing, and Amane felt more softness than before, glancing aside and looking down.

Once he saw the lumps that easily passed the bubble tea challenge, he was embarrassed of his own actions.

Mahiru sensed his stare, and was a little embarrassed as she wryly put her hands behind his head, bringing him onto her chest.

“…I do prefer the Amane-kun challenge to the milk tea challenge.”

It seemed Mahiru was smiling, but as Amane’s face was buried into her chest, he could not see her expression.

The only thing he understood that the longer he was embraced, the feelings inside his heart were harder to suppress.

He thought to himself that he should never let Mahiru do this the next time, but the fluffy feeling was…he decided to let himself enjoy this a little more, and enjoy Mahiru’s warmth. 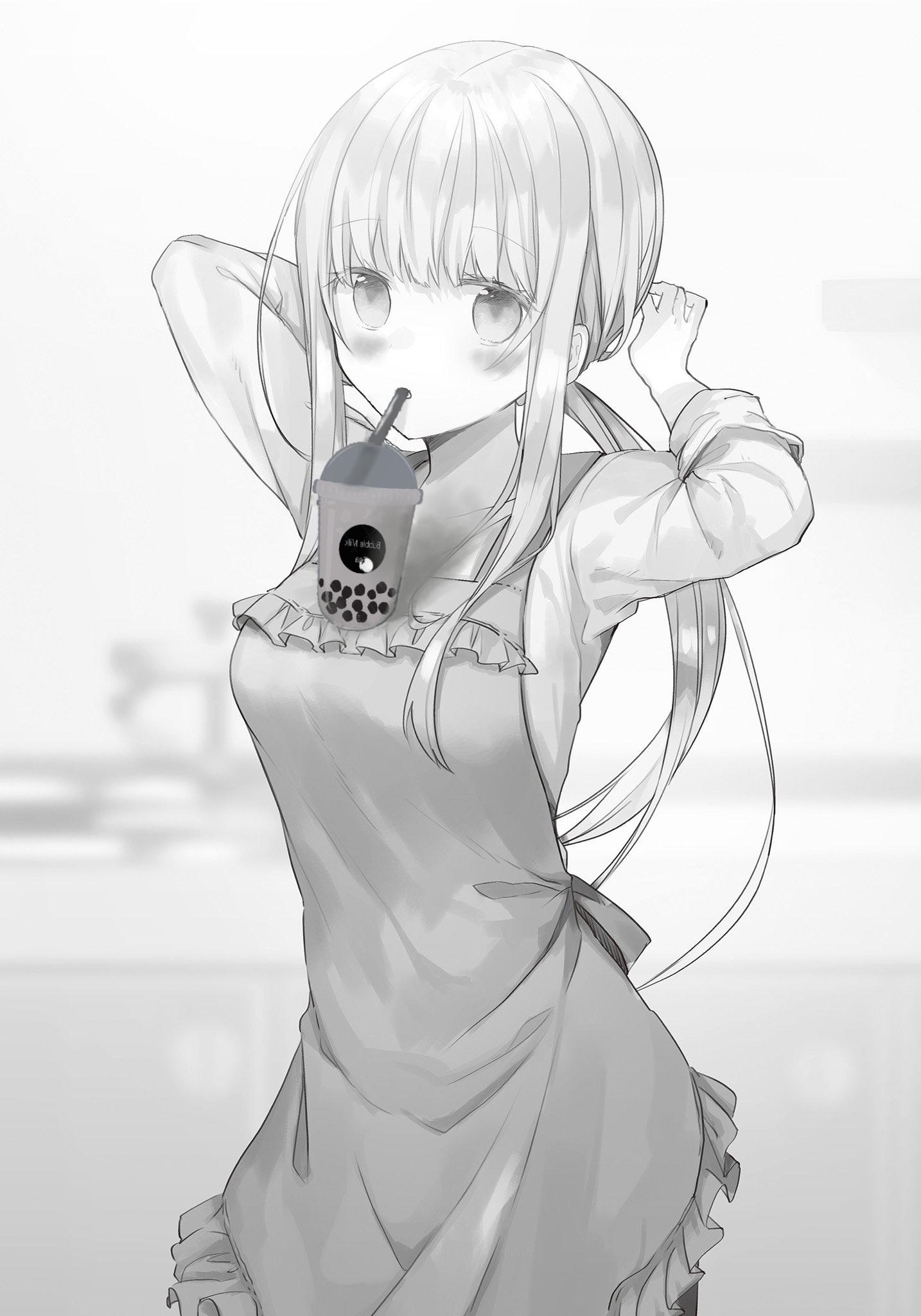